US Club Soccer’s id2 Boys Program Director, Gerry McKeown, has named his All-Time Best XI alumni of id2 boys programming, based upon each player’s performance throughout their time in the id2 Program, as well as the individual’s subsequent achievements and success. id2 programming includes id2 Training Camps, id2 National Selection International Tours and Player Development Programs (PDP). Established in 2004, US Club Soccer’s id2 National Identification and Development Program provides an opportunity for the country’s elite youth soccer players to be identified and developed, and scouted for inclusion in U.S. Soccer’s National Team programs. 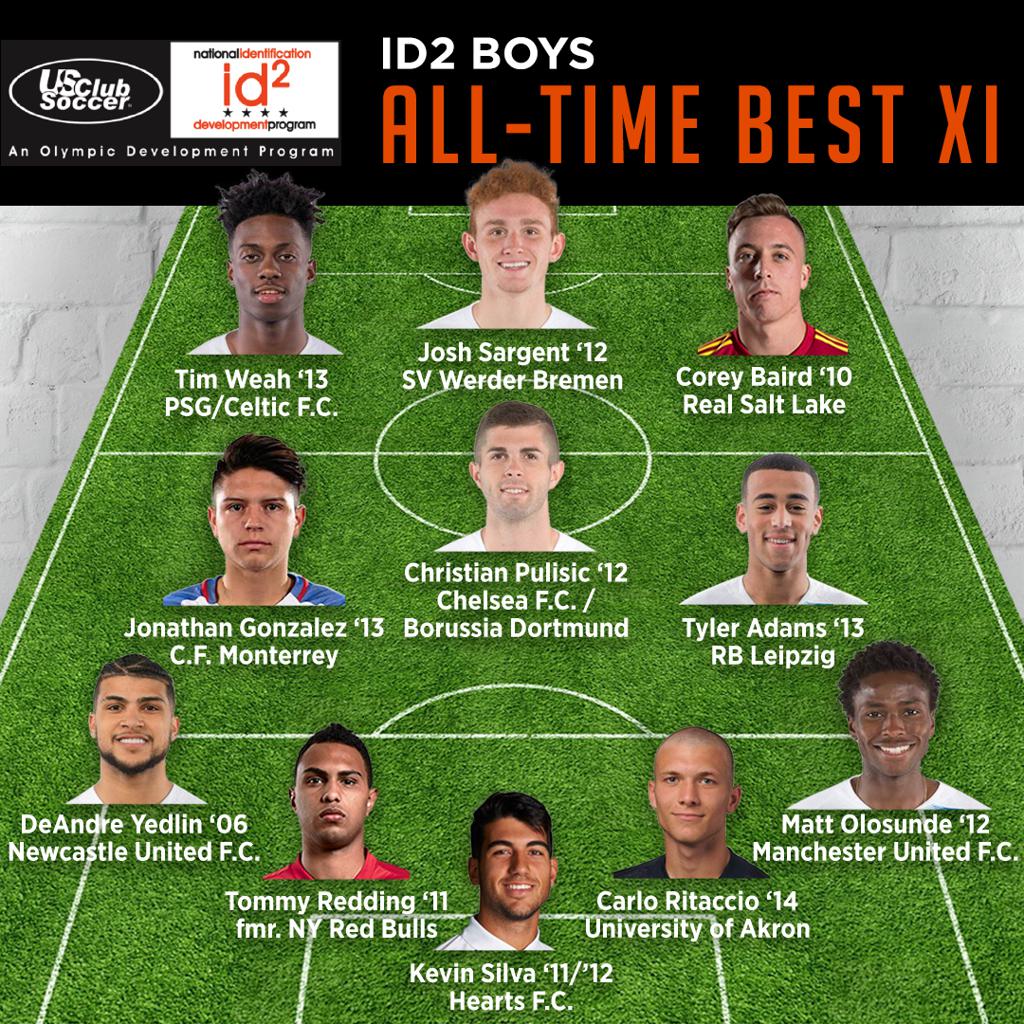 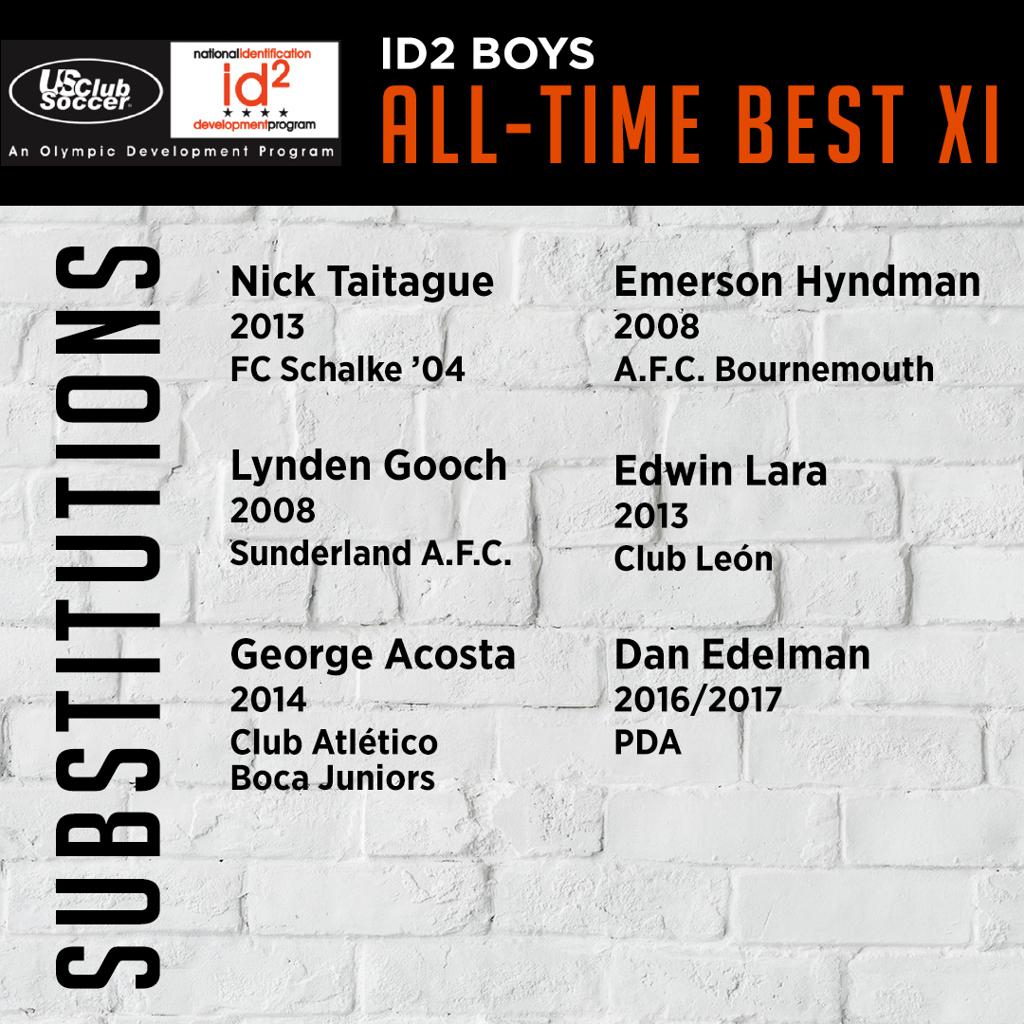 • Tyler Adams (2013), RB Leipzig – Adams was a member of the 2013 id2 National Selection International Tour to Spain, before making his professional debut in 2015 with the New York Red Bulls. Labeled a “winner,” by McKeown, Adams has exemplified this with nine appearances for the U.S. Men’s National Team, as well as a transfer to RB Leipzig and the Bundesliga.

• Corey Baird (2010), Real Salt Lake – As a member of the inaugural id2 National Selection International Tour in 2010, Baird played an integral role in the team’s attack and carried his “guile” and creativity with him to the next levels, where he won three consecutive national championships at Stanford University, before being named the 2018 MLS Rookie of the Year.

• Jonathan Gonzalez (2013), C.F. Monterrey – As a rising star in the midfield, “power” represents the work rate that enables Gonzalez to dictate the game from his central position. Just 19 years old, the 2013 id2 National Selection member has already appeared for the Mexican National Team and won the Apertura 2017 championship with Monterrey, where he was named to the Liga MX Best XI in his first season with the senior team.

• Matt Olosunde (2012), Manchester United F.C. – As the right-back and “engine” of the 2012 id2 NSIT, Olosunde’s designation speaks for his initiative and work ethic on the field, that has helped see him move from the New York Red Bulls Academy to Manchester United. He made his debut for the U.S. Men’s National Team in May 2018.

• Christian Pulisic (2012), Chelsea F.C. / Borussia Dortmund – As the No. 10 and “genius” of the 2013 id2 National Selection team, Pulisic shouldered much of the load of creating in the attack. His potential was on full display when he starred in the 2012 Selection team’s 3-1 win against FC Barcelona’s Academy squad, and even after being named the 2017 U.S. Soccer Male Player of the Year and becoming the youngest foreign player to score in a German league match, that potential has yet to be fully tapped.
• Tommy Redding (2011), fmr. NY Red Bulls – As the defensive anchor for the 2011 id2 National Selection International Tour, Redding earned McKeown’s “clean” designation, and was an integral component of the team’s two wins, including a 4-1 victory against Manchester City FC Academy. Redding went on to become Orlando City SC’s first-ever homegrown signing, at age 17, where he played for three years before signing with the New York Red Bulls in 2018.

• Carlo Ritaccio (2014), University of Akron – Less than five years removed from his experience on the 2014 id2 National Selection International Tour, Ritaccio’s strong leadership skills, and ability to “organize” in defense resulted in him being “the best captain that the id2 NSIT has ever seen” and landed him a spot as the only current collegiate player in this Best XI. As a freshman in 2018, Ritaccio started all 22 matches he appeared in en route to reaching the NCAA National Championship game and being named the 2018 National Freshman of the Year by TopDrawerSoccer.com.

• Josh Sargent (2012), SV Werder Bremen – Since attending a US Club Soccer PDP in 2012, Sargent has exploded onto the international soccer scene and justified McKeown’s “finisher” label. Since being called up to the Werder Bremen senior team from the U-23 side, the 19-year-old striker has notched two goals in nine appearances and recently signed a long-term extension for the Bundesliga club. He has recorded two goals in six games for the U.S. Men’s National Team.

• Kevin Silva (2011/2012), Hearts F.C. – As the goalkeeper for both the 2011 and 2012 id2 National Selection International Tours, Silva’s feet and “distribution” abilities made him an integral component to each of those team’s success. This talent enabled Silva to end his collegiate career abruptly to sign a professional contract with Hearts F.C. of the Scottish Premier League.

• Tim Weah (2013), PSG/Celtic F.C. – A member of the 2013 id2 National Selection team, Weah’s tremendous talent and intrinsic knowledge of the game have resulted in McKeown’s “instinctive” designation. Weah signed a professional contract with Paris Saint-Germain at the age of 17. The forward has since been loaned to Celtic F.C., where he has registered two goals in his first seven matches. Weah has also appeared in eight games for the U.S. Men’s National Team, scoring a goal in his first start.

• DeAndre Yedlin (2006), Newcastle United – Yedlin has accumulated an impressive resume since attending an id2 Training Camp in 2006. Yedlin’s speed made it no surprise that McKeown gave him the label, “pace,” as he has terrorized opposing teams up the right flank in the MLS and EPL for years. He has appeared in 86 games and scored two goals for his current club, Newcastle United. After a breakout performance in the 2014 FIFA World Cup, Yedlin has become a vital member of the U.S. Men’s National Team, recording 57 appearances to date.

• George Acosta (2014), Club Atlético Boca Juniors – Since attending the 2014 id2 National Selection International Tour, Acosta has been climbing the ranks of the U.S. Youth National Team ladder. Before signing a professional contract with Boca Juniors, the attacking midfielder appeared in three FIFA 2017 U-17 World Cup games for the U.S., registering one goal and one assist. Acosta also led the U-17 boys national team to win the 44th International Montaigu tournament in 2016. His six goals were the most in the tournament and included two goals in the final against host nation France.

• Dan Edelman (2016/2017), PDA – As the youngest member of this Best XI and the substitutions, Edelman demonstrated enormous potential on the 2016 and 2017 id2 National Selection International Tours. The dynamic midfielder was selected to participate in U.S. Soccer’s first-ever Boys National Team Futures Camp in May 2017, and has trained with the U.S. U-16 boys national team.

• Lynden Gooch (2008), Sunderland A.F.C. – Gooch attended an id2 Training Camp in 2008 and has since developed in the Sunderland A.F.C. Academy. The midfielder has tallied three goals and four assists thus far in the English League One season.

• Emerson Hyndman (2008), A.F.C. Bournemouth – Hyndman was identified at a 2008 id2 Training Camp before starting his professional career with Fulham, and later transferring to Bournemouth. After loan stints in the Scottish Premiership with Rangers and Hibernian, where the central midfielder accumulated five goals in 28 appearances, he has returned to Bournemouth.

• Edwin Lara (2013), Club León – After standing out amongst the 2013 id2 National Selection team, Lara has earned his spot at CF Pachuca before moving to Club León in 2018. Lara was named one of the best 60 young players by The Guardian in 2016. He recently trained with the U.S. U-20 National Team.

• Nick Taitague (2013), FC Schalke 04 – Since participating in the 2013 id2 National Selection International Tour, Taitague has signed with FC Schalke 04. The attacking midfielder has progressed from the U-19 team to the Schalke second team and has played for the U.S. National Teams up to the U-20 level.