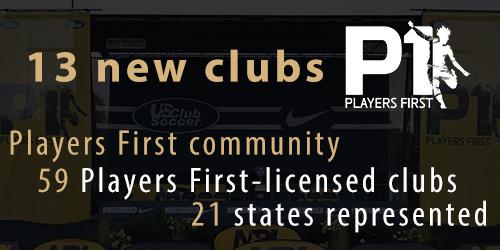 The second group of Players First-licensed clubs includes 13 clubs from nine states around the country, bringing the Players First community to a total of 59 clubs in 21 states.

Through a rigorous application process, these clubs have all proven their commitment to providing a holistic club soccer experience for parents and players, which emphasizes the development of each individual to his or her full potential, and helps parents make better choices about where their children should play.

This is youth soccer’s “Good Housekeeping Seal” and these 13 new clubs – and 59 total – stand out locally and nationally as improving the club soccer experience for players and parents.

US Club Soccer CEO Kevin Payne described the Players First application process as robust. “We believe this to be the most rigorous and comprehensive attempt in U.S. Soccer history to identify those clubs that have demonstrated a commitment to creating the kind of infrastructure and culture necessary to provide the best overall environment for players,” Payne said.

In addition to this nationally recognized stamp of approval, these clubs also receive increased exposure through US Club Soccer’s best-in-class search engine optimization, more access and special benefits from Players First partners and resources, features on US Club Soccer digital and social channels, customizable content and more. They’ll also be invited to a Players First symposium in 2019.

Details about the licensing process can be found on this web page, including the terms and eligibility information. These 13 new clubs enjoy Players First licensing status until March 31, 2021, at which time there will be a renewal opportunity. Club applications are accepted on an ongoing basis, and approved clubs will be announced quarterly. Clubs that apply but do not meet the standards and requirements outlined in the application all receive a detailed letter explaining any deficiencies with suggestions and resources to correct those.

The application includes seven sections, in which clubs must demonstrate their commitment to the Players First pillars: