Due to the impact of the COVID-19 pandemic, the National Cup XIX Regionals and Finals have been canceled. 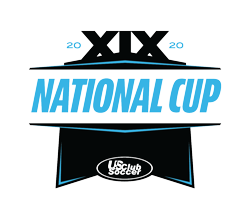 Teams interested in applying to any of the six National Cup XIX Regionals throughout the country in June are encouraged to take advantage of the early application rate, which expires for all Regionals on April 27.

The National Cup is US Club Soccer’s annual cup-based championship series that incorporates Regionals and state cups into an advancement opportunity to the National Cup Finals. National Cup XIX Regionals are open to 13-U through 18/19-U boys and girls age groups (2007s through 2001/2002s) for Midwest, Northwest, South Central and Southeast Regionals and 12-U through 18/19-U (2008s through 2001/2002s) for the Mid-Atlantic and West Regionals. There will be Super Group (most competitive) and Premier Group divisions. Access the applications here.

Winning 13-U through 18/19-U boys and girls teams from Regionals and qualifying state cups advance to the National Cup XIX Finals, which will be held July 17-21, 2020 at DICK’S Sporting Goods Park in Commerce City, Colorado.

Participating teams should be well-versed in official National Cup XIX rules.  As a reminder, below are some of the rule changes effective this summer:

Join the conversation on social media by using the hashtag #NationalCupXIX.