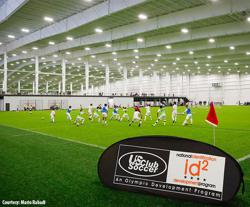 WESTFIELD, Ind. | The id² Training Camp in Indiana was held March 23-26 at Grand Park in Westfield, featuring top 2004 boys and 2003 girls around the country. A total of 118 players from 75 clubs and 25 states participated in the comprehensive identification and development camp.

Players competed in various training sessions, scrimmages and off-the-field presentations – all under the watchful eye of id² staff and U.S. Soccer Federation scouts.

Before the players departed for their hometowns, they received instructions from their camp coaches for improvement.

This was the first time Grand Park has hosted an id² Training Camp. It hosted US Club Soccer’s league-based and cup-based national championship events in 2015 and will do so again this July for the 2017 NPL Finals and National Cup XVI Finals.

US Club Soccer’s id2 Program provides an opportunity for the country’s elite youth players to be identified and developed, and scouted for inclusion in U.S. Soccer’s national team programs. A comprehensive national scouting and recommendation program is used to form a pool from which top players are invited to attend an id2 Training Camp.

There is no cost to players to be identified for or participate in the id2 Program, an Olympic Development Program open to all players regardless of U.S. Soccer affiliation. For id2 Training Camps, all lodging, meals and training gear are provided at no cost by US Club Soccer and Nike.