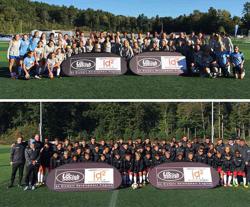 LANCASTER, Mass. | The id² Training Camp in Massachusetts was held Sept. 28-Oct. 1 at the FC Stars Soccer Complex in Lancaster, featuring top 2004 boys and 2003-04 girls throughout the country. A total of 113 players from 61 clubs and 15 states participated in the camp, which included on- and off-the-field training sessions.

This camp was the first of two post-summer camps, with the final camp of 2017 being held in early December in Casa Grande, Ariz. Those will conclude the training camp portion of the id² age group cycle targeting 2004 boys and 2003 girls. As is customary for the fall and winter id2 camps, scouting extends to 2004 girls, as well, to accommodate upcoming U.S. Soccer Federation’s youth national team programming on the girls side.

Players participated in field sessions, which emphasized technical and tactical principles. A collection of these exercises will soon be released publicly on usclubsoccer.org, as part of a Players First partnership with SportSessionPlanner. Additionally, players attended classroom sessions, which focused on sports psychology and assisted in the visual demonstration of field strategies.

The id2 Program is an Olympic Development Program (ODP) approved by the United States Olympic Committee and the U.S. Soccer Federation. There is no cost for players to participate or be scouted, and all meals, lodging and gear are provided by US Club Soccer and Nike.

This was the first time FC Stars Soccer Complex has hosted an id² Training Camp. The complex has previously hosted the Northeast Girls NPL playoffs, most recently in 2016.