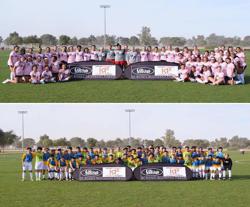 CASA GRANDE, Ariz. | The final id² Training Camp of the current age cycle, which targeted 2004 boys and 2003-04 girls, was held at Grande Sports World in Casa Grande, Arizona, Dec. 7-10. It was attended by 109 top players from those age groups, hailing from 64 clubs across 29 states.

The athletes participated in daily field sessions, with two-a-days on Friday and Saturday. Each training session emphasized various technical and tactical principles. A collection of these exercises will soon be released publicly on usclubsoccer.org, as part of a Players First partnership with SportSessionPlanner.

Established in 2004, US Club Soccer’s id2 Program provides an opportunity for the country’s elite youth soccer players to be identified and developed, and scouted for inclusion in U.S. Soccer’s National Team programs.

Learn some more about the foundations and beliefs behind the id² Program, from the directors themselves.

The id2 Program is an Olympic Development Program (ODP) approved by the United States Olympic Committee and the U.S. Soccer Federation. There is no cost for players to participate or be scouted, and all meals, lodging and gear are provided by US Club Soccer and Nike.