2011 id2 National Selection boys team: Where are they now? 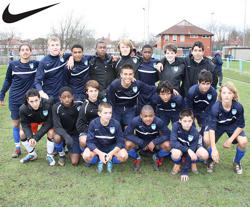 Off the pitch, the athletes attended the Old Firm match, where they saw Rangers FC take on their arch rival Celtic FC. The players also attended an EPL match between Manchester United and Wigan FC as well as a Liverpool FC U-18 game.

Twelve players from the 2011 id2 National Selection International Tour team have played collegiate level soccer. So far, six players from the roster are playing professionally, with five in MLS and one in Liga MX. Five of those players went straight from high school to professional leagues.

Shannon Seymour of @chicagofire on the field at the final scrimmage of the Chicago Combine ready to #turnheads pic.twitter.com/5EUkU5gFh1