2010 id2 National Selection boys team: Where are they now? 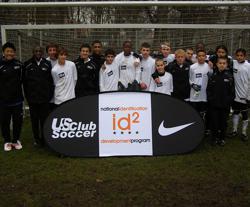 Aside from gameplay and on-the-field training, the players indulged themselves in joining the local fans in the stands at the FC Twente vs. Ajax Eredivise match and the 1899 Hoffenheim vs. Vfl Bochum Bundesliga game, walking tours through multiple European cities, and a tour of the renowned Amsterdam ArenA, where the U.S. Men’s National Team would fall 2-1 to to the Netherlands in an international friendly just two weeks after the international tour’s conclusion.

The first-ever id2 National Selection roster was comprised of 15 boys born in 1996 and three born in 1997.

Sixteen players from the 2010 id2 National Selection International Tour team have played collegiate level soccer. So far, six players from the roster are playing professionally, with five in the MLS. Three of those have been homegrown signings to MLS teams, while two were first round picks in the MLS SuperDraft.