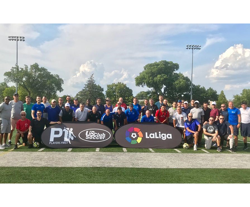 ELHMURST, Ill. | A total of 42 coaches attended the 13th LaLiga Formation Methodology course – and third-ever Level 2 course, which was held Aug. 3-5, at Elmhurst College, just outside of Chicago. After being introduced to LaLiga Formation Methodology in Level 3, the attendees were taken to further depths during this advanced level on methodological principles and the utilization of Kimet Sport: the official methodology software for design, control, evaluation and periodization of training sessions used by LaLiga clubs.

This weekend marked the third time that the course has been hosted in the Chicago area and supported by Sockers FC. A pair of Level 3 courses was previously held at Elmhurst College. Through all 13 courses in the history of the series, nearly 1,300 coaches from 400 clubs have been educated in LaLiga Formation Methodology.

A large majority of the participating coaches earned Level 2 eligibility by attending the 2017 Level 3 course at Elmhurst College, while the remaining coaches qualified through previous Level 3 courses held in California, New England and Oklahoma.

Tinashe Mugabe, coach of North Carolina-based FC Athletico, attended both the Level 3 course in Massachusetts, July 27-29, and this Level course in Illinois. “I was thoroughly impressed with the organization and structure, as well as venues of each of the courses. The coaches presented each course with such energy and passion that was contagious, allowing a unique perspective in both courses how to educate the players in a fun, effective way,” Mugabe said. “While the Level 3 course was an introductory course, there was more than enough insight and information in the small details of how to structure and conduct training sessions. The Level 2 course went into a lot of detail, and I really appreciated the fact that we spent a lot of time at the field, which allowed us to see the coaches run the sessions covering different aspects of the game with players of different age groups.

“Naturally, having to travel to Massachusetts and Chicago from North Carolina for the two courses, I was hoping to engage, learn and gain an understanding of the game and LaLiga methodology and I did. It certainly was worth it, and I look forward to attending the Level 1 course.”

As the third-ever Level 2 course, the attendees completed the advanced curriculum and now join the exclusive group of coaches eligible for the expert Level 1 courses. More details will be announced soon.

The coaches were taught by LaLiga methodology experts Gari Fullaondo, Hugo Blanco and Zunbeltz Fullaondo. Gari Fullaondo, the series leader, was the Director of Methodology at Athletic Bilbao, and all three are UEFA-PRO coaches. Their vast experience at the upper levels of the sport are detailed on the course web page.