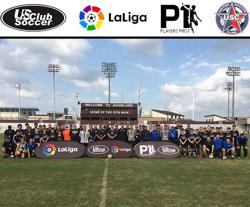 COLLEGE STATION, Texas | The first LaLiga Formation Methodology coaching education course was held in March 2016, hosted by the United Soccer Clubs. Fast forward two years, and the Texas league was back at it – hosting another Level 3 course at Texas A&M University in front of about 60 coaches from 17 clubs.

The difference this past weekend: it wasn’t a pioneer course. Instead, the LaLiga Formation Methodology series has progressed significantly. Now, after 11 courses, the impact has reached 1,200 coaches from 350 clubs and organizations throughout the country. LaLiga Formation Methodology has become one of the primary vehicles for delivering the Players First philosophy, and particularly, the emphasis on the Coaching Development pillar.

The coaches were taught by LaLiga methodology experts Gari Fullaondo, Hugo Blanco and Zunbeltz Fullaondo. The trio showed attendees how to build a proper foundation for their clubs – one built on proven methodology and tactics. It was a 22-hour course that included various field and classroom sessions. Gari Fullaondo, the series leader, was the Director of Methodology at Athletic Bilbao, and all three are UEFA-PRO coaches. Their vast experience at the upper levels of the sport are detailed here.

The five additions for Challenge SC, in particular, brings the club’s total number of LaLiga Formation Methodology-educated coaches to 19 – vaulting them into a tie for fifth in the all-time club leaderboard.

“The LaLiga Formation Methodology course was one of the best coaching education events I have attended in my 25-plus years of attending and teaching coaching education courses,” said Aaron Metzger, Director of Coaching for Classics Elite Soccer Academy. “Gari and his staff did a fantastic job of presenting methodologies and concepts that are not only relevant and applicable to the youth soccer landscape in the United States, but also necessary. Gari and his staff are accessible, knowledgeable, energetic, and they exude a contagious passion and energy for coaching education and growing the beautiful game. Our coaches will continue to attend the LaLiga courses in the future, because I know it will ultimately benefit our players, which is the most important thing.”

“The amount of attention and focus that they put in their philosophy to help the players grow from grassroots all the way up to professional is amazing,” said Danny Parejo, Campus Director of Albion Hurricanes FC. “We know that our coaches learned a lot of over the three days; we are all using these specific methodology and applying it to our teams. We brought back what we learned and taught it to the rest of our coaching staff. We can’t wait to get more Albion Hurricanes FC coaches into the LaLiga courses and see our club, as a whole, progress through grassroots up to our elite/ECNL players and teams to help our country grow and be able to compete with the rest of the world.”