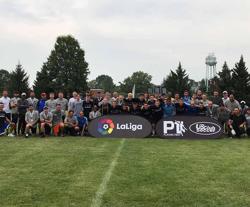 PENNINGTON, N.J. | About 40 coaches continued their coaching education by completing the LaLiga Formation Methodology Level 2 course, Aug. 11-13 at The Pennington School. Nearly 1,000 coaches from about 350 clubs, colleges and organizations throughout the country have taken a LaLiga Formation Methodology course, including more than 150 coaches who have completed Level 2 – the advanced stage of the coaching development series.

Attendees from this course previously completed one of the preceding Level 3 courses offered through the US Club Soccer/LaLiga partnership, which was formed through the Players First initiative. While the introductory base was established in Level 3, LaLiga experts went into further depth on methodological principles – both technical and tactical – and extended the coaches’ use of Kimet Sport: the software for design, control, evaluation and periodization of training sessions used by LaLiga academies.

Most of the participants took either of the Level 3 courses offered in Carlstadt, N.J. or Lorton, Va., last year. Outside of that majority, three coaches completed Level 3 in Elmhurst, Ill., last year and an additional three came from the Livermore, Calif. course last year. Two coaches from HMMS SC – Matt Anderson and Steve Conkle – took advantage of the Level 3 course a week before in Illinois and decided to immediately advance their knowledge to Level 2 this past week.

Matt Anderson said he “jumped at the chance for a first-hand look” at consecutive weekends of LaLiga-led education, adding that he wanted to be eligible as soon as possible for the first Level 1 course when it’s announced. “The courses redefined my view on how clubs and coaches should approach youth player development,” Anderson said. “While I have always believed that having a plan to develop players over their formative years was important, the course established a new comprehension of how a detailed, well-organized and carefully planned curriculum can be created.”

The next stage for these advanced coaches is Level 1, which signifies the expert level of knowledge of LaLiga developmental principles. Opportunities to attend a Level 1 course, to be held in Spain alongside Spanish academies, will be announced at a later date.

LaLiga Formation Methodology courses outline the philosophy and methods used across LaLiga to train, develop and form some of the world’s top players.

The 2½-day Level 2 course includes theory and practical sessions both on and off the field. Topics include: