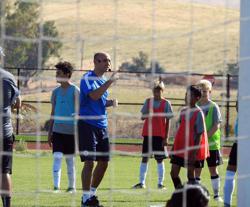 The Level 2 course represents an advanced stage of the LaLiga Formation Methodology coaching education series. While the introductory base was established in Level 3, LaLiga experts went into further depth on methodological principles – both technical and tactical – and extended the coaches’ use of Kimet Sport: the software for design, control, evaluation and periodization of training sessions used by LaLiga academies.

Jordan Ferrell, of Central Valley Monarcas and University of the Pacific, was one of those NorCal course returnees. “I’ve come back, because I’ve hoped to gain more knowledge about how I can become more detailed or how I can provide better sessions. The off-the-field organization of their methodology is very, very extensive,” Ferrell told norcalpremier.com. “Every day you get to learn from somebody who has worked in one of the best clubs in the world, but then also worked for one of the best leagues in the world. In youth development, there’s a lot of different things that you can learn from his (Gari Fullaondo) expertise, from their expertise.”

What’s next for these advanced, next-level coaches? Level 1 signifies the expert level of knowledge of LaLiga developmental principles. Opportunities to attend a Level 1 course, to be held in Spain alongside Spanish academies, will be announced at a later date. LaLiga Formation Methodology is a staple of US Club Soccer’s Players First initiative, which is a branded, holistic club soccer experience for parents and players, emphasizing the development of each individual to his or her full potential, and helping parents make better choices about where their children should play. Through six Level 3 courses, about 900 coaches from nearly 300 clubs and organizations have been educated in LaLiga Formation Methodology. A Level 3 course will be held Aug. 4-6 in Elmhurst, Ill., and an additional Level 2 course will take place Aug. 11-13 in Pennington, N.J.

LaLiga Formation Methodology courses outline the philosophy and methods used across LaLiga to train, develop and form some of the world’s top players.

The 2½-day Level 2 course includes theory and practical sessions both on and off the field. Topics include: