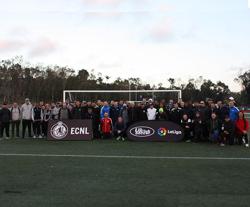 LA JOLLA, Calif. | By nature, the LaLiga Formation Methodology message is well traveled. Last year, five courses held throughout the United States brought the international expertise to about 750 coaches from 250 clubs and organizations.

If the first course of 2017 is any future indicator, LaLiga Formation Methodology will continue to spread at an exponential rate across America. A total of 146 coaches representing 76 clubs and 27 states attended the most recent course in the ongoing series, which is a staple of US Club Soccer’s Players First initiative.

This course, hosted by Elite Clubs National League (ECNL), was held Feb. 3-5 in La Jolla, Calif. It was held in conjunction with the ECNL Coaching Symposium. Field sessions took place at the San Diego Polo Fields and University City High School, and classroom sessions were at the San Diego Marriott La Jolla.

The surge of newly trained coaches in LaLiga Formation Methodology now brings the total to about 900 coaches from 292 clubs/organizations and 32 states.

Participants also received a one-year license to Kimet Sport – the software for design, control, evaluation and periodization of training sessions used for the course and by LaLiga academies. The license is valid for one age group per year per attendee.

During the past two courses, two clubs dominated the attendance, with World Class FC bringing 19 coaches to the event in New Jersey, and Sockers FC bringing 28 to the course in Chicago. This course was more diverse, but four clubs did have at least five coaches: PDA (8), West Coast FC (7), Michigan Hawks (5) and FC Boston (5).