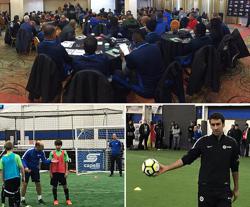 A diverse group of 115 coaches from 66 clubs across the country attended the fifth LaLiga Formation Methodology course, Dec. 16-18 in the New York City metro area. It was the fifth and final course of 2016 with several in the planning stages for next year. Fourteen states were represented, and while the Northeast populated most of the roster, coaches from California, Florida, Illinois, Michigan and South Dakota also attended.

A total of about 750 coaches from 250 clubs/organizations have now been trained in LaLiga Formation Methodology. The courses – held previously in Texas, California, Virginia and Illinois – have bolstered not only the US Club Soccer/LaLiga partnership but also the Coaching Development pillar of Players First.

It was a multi-faceted course, featuring field and classroom sessions and a Q&A with LaLiga legend Raúl González Blanco. “This is a very important course to LaLiga. There is so much potential in the U.S.,” Raúl told attendees. “It’s important to win, but at this age, the most important thing is to develop each player.”

While Raúl’s presence – which included assisting with a striker session Friday evening – was certainly a highlight, participating coaches left with a foundation of proven methodology that can be applied to their clubs immediately. id² director Gerry McKeown, whose coaching experience is thoroughly cultured, called the course “remarkable.”

“It’s a great opportunity to see what other coaches do,” McKeown said. “And certainly with the reputation that Spain has, it would be negligent on our part if we weren’t to come… I thought his presentation (Gari Fullaondo, Technical and Methodological Advisor of LaLiga) was as concise and as comprehensive as you can get.”

World Class FC brought 19 coaches to the course in a strong showing of a commitment to coaching development. That is the second-highest per club total in the history of the LaLiga Formation Methodology series, second only to Sockers FC (28) in August.

“We are extremely dedicated to coaching education,” said Kazbek Tambi, Director of Coaching for World Class FC. “As we know, there’s a direct benefit to our players from every bit of extra knowledge. Our coaches attending the course had an excellent experience and took away many concepts that they will be able to utilize with their teams.”

A dozen coaches from ACYS Spirit United traveled from Florida to the course, with some seeing snow for the first time after a few inches of the fluffy precipitation Saturday morning.

John Curtis, Technical Director of New York Club Soccer League and PDP Director of the New England Premiership, also praised the infectious Fullaondo, who leads the course curriculum and was a long-time methodological director of Athletic Bilbao. The Basque club is one of only three LaLiga clubs (Real Madrid and FC Barcelona) to have never been relegated.

Curtis described the three-day event as: “a lifetime’s worth of coaching experiences working in professional youth development, expertly delivered by one of the best coach educators I’ve seen. Add the introduction of the Kimet Planning software and this course has unbelievably good value. A must for clubs and coaches who are serious about giving their players the best development opportunities.”

A common characteristic praised by attendees was the LaLiga clinicians’ (Fullaondo, Blanco and Zunbeltz Fullaondo) attention to detail. Sam Nellins, PDA Director of Operations, called it “extraordinary.” Nellins and McKeown, who also coaches at PDA, are making conscious efforts to further develop the club’s staff. “The biggest thing is planning,” Nellins said, while observing a field session Saturday night. “They have it down to a science.”

“This is where he (Raúl) came from. He came from this type of system,” Nellins added. “If it makes players like him, we’ve got to learn a lot of lessons.”

Participants also received a one-year license to Kimet Planning – the software for design, control, evaluation and periodization of training sessions used as for the course and by LaLiga academies. The license is valid for one age group per year per attendee.