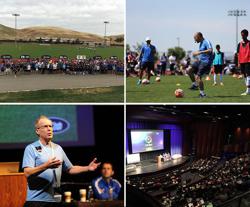 During the opening session of the LaLiga Formation Methodology course this past weekend in Livermore, Calif., Gari Fullaondo stood on stage, looked out into the audience of about 270 coaches and paused. Then, in less than a dozen words, the Technical and Methodological Advisor of LaLiga summed up the motivation for this coaching series, the US Club Soccer/LaLiga partnership and Players First in less than a dozen words.

“We must get better,” he said. “It is our responsibility to the players.”

Coaching Development is just one pillar of Players First – among Club Development, Player Development, Parent Engagement & Education and Player Health & Safety – but it produces positive ripple effects throughout the game.

This LaLiga Formation Methodology course – hosted by NorCal Premier Soccer – was considered “Level 3,” which is an introductory base to future Level 2 and Level 1 courses. The eager crowd of about 270 coaches represented nearly 100 clubs and colleges, and more than 20 percent of attendees have obtained a U.S. Soccer or UEFA ‘B’ or ‘A’ license. The amount of coaches nearly tripled the attendance of the first-ever LaLiga Formation Methodology course in Texas, March 11-13.

“If you love the game, putting in extra work isn’t as hard,” Urzaiz told a group of NorCal PDP players after a field session. “If you want to achieve great things, you have to work… much more than (just) team practice.”

In addition to field and classroom sessions, attendees were also able to observe the Colombian men’s national team train – the morning after Colombia defeated the USMNT, 2-0 at Levi’s Stadium in Santa Clara. About half of the course participants attended that Copa America Centenario game.

Participants also received a one-year license to Kimet Sport – the software for design, control, evaluation and periodization of training sessions used as for the course and by LaLiga academies. The license is valid for one age group per year per attendee.

The course was well received by attendees, as many took to Twitter to post their experiences. More responses can be seen by searching for the Players First-designated hashtag #P1soccer.