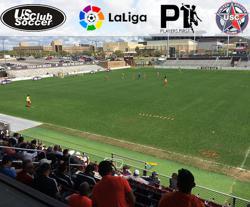 The 22-hour course in Texas is considered “Level 3” and serves as an introductory base to the comprehensive development strategies used by the top professional league in the world. Graduates of this course will now participate in webinars over the coming weeks before being eligible to advance to the intermediate Level 2 setting. Eventually, Level 1 courses will be offered in Spain as the top flight of LaLiga Formation Methodology. Level 1 and 2 courses will be available in 2017.

This past weekend in Texas included a sample base for future Level 3 courses. Activities included theory and practical sessions in the Texas A&M PEAP Building and on Ellis Field. Texans SC (Houston) – a member of the United Soccer Clubs – supplied demo players.

Participants also received a one-year license to Kimet Sport – the software for design, control, evaluation and periodization of training sessions used as for the course and by LaLiga academies. The license is valid for one age group per year per attendee.

Blanco and Gari Fullaondo were among the LaLiga staff in attendance at the 2016 NSCAA Convention, where US Club Soccer debuted the Spanish professional league and detailed the partnership. Blanco saw how the LaLiga Formation Methodology course in Texas is helping LaLiga establish itself internationally. “After the great success and appreciation of this first training course for coaches, LaLiga confirmed its growing presence in the United States with its international expansion strategy,” Blanco said.

Huge thanks to #Gari #Zun & #Hugo for their insight & passion. We leave as better coaches @USClubSoccer @LaLigaEN pic.twitter.com/r1scb93aqP

Finally arrived on the campus of aTm! Time to learn some new coaching methods from @LaLigaEN @USClubSoccer thanks for bringing this to TX!