Visit the LaLiga Coach Education page to register for the LaLiga Virtual Coaching Series by Verizon!

LaLiga, the world-renowned professional league in Spain featuring top clubs like FC Barcelona and Real Madrid, entered into a long-term technical partnership with US Club Soccer, beginning in 2015 with the launch of Players First. Introduced by Nike, the LaLiga partnership focuses on strategic development and resource support for the club, player and coach development pillars of Players First.

In February 2019, US Club Soccer and LaLiga North America announced an expansion of their partnership. The long-term extension continues a valuable relationship in youth soccer that has provided various coaching education resources to the American game, directly educating thousands of coaches and impacting even more players. It also points to LaLiga North America’s commitment to growing soccer in the U.S.

LaLiga North America is a joint venture between LaLiga and Relevent Sports, which serves as the exclusive representation of LaLiga in the U.S. and Canada for all business and development activities. The operation supports the league’s growth in the U.S. and Canada through consumer-related activities including youth academies, development of youth soccer coaches, marketing agreements, consumer activations, exhibition matches and plans to have an official LaLiga Santander match played in the U.S.

LaLiga North America provides US Club Soccer and Players First clubs with training curriculum, which helps create a better learning environment and day-to-day experience to enhance the development of all players.

The LaLiga Formation Methodology courses kicked off in spring 2016 with Introductory (Level 3), before progressing to Advanced (Level 2) and Expert (Level 1). To date, there have been 17 courses, consisting of all levels, reaching about 1,500 coaches from 400 clubs and organizations throughout the country. 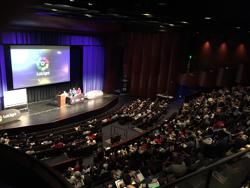 ⚽️ This is football. 🔥 This is passion. ⛪️ This is @Athletic_en. The lions hit 4⃣ at San Mames for the first time… https://t.co/REgrSdIgao

RT @LaLigaTV: He may be 39, but @joaquinarte is still as sharp as ever... 💚💪 Tune into #LaLigaTV for the second half of #AthleticRealBetis…

LaLiga In the News

LaLiga Formation Methodology courses in Ohio postponed due to COVID-19